A few years ago, an interesting kickstarter projected popped up:

The goal was to publish source code to a GPU that is register compatible with the late 90’s era Number Nine “Ticket To Ride IV” GPU. Although the project didn’t meet its funding goal, the person behind it later published the code on github.

Although this is an older design, it has a lots that is worth studying. It’s instructive to compare it to the VideoCore GPU that I walked through in a previous post. While there are some fundamental differences, there are surprising number of similarities, which shows how modern GPUs evolved from earlier ones.

Here are some differences between the two:

The project includes a technical reference manual that documents the programmers interface to the video card. I’ve simplified the block diagram from page 1-2: 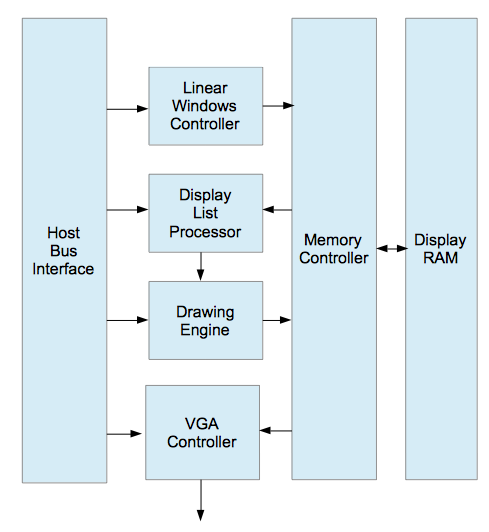 Here’s a quick overview of these components:

This is a big project with over 5 million lines of code. But it’s organized fairly logically into subdirectories by function. The Verilog code is in the hdl/ directory. Here is an overview of the directories, which I’ve grouped together by area:

There is also an extra directory called de_temp that contains copies of many modules that are in de. It looks like it was perhaps a working directory or merge cruft. I sent an email to Frank Bruno, the author to ask about it. It had been a few years, so he didn’t remember the exact details, but also though it was probably just a working directory. I’ve ignored it here.

For now, I’m going to ignore the video card components and focus on the drawing engine. Also, I will focus on the 3D rendering operations and ignore 2D-only acceleration functions on GPLGPU like bit blits and lines. This functionality is in the de, de3d, lucy_tc, math, and mc_graph directories, a more manageable ~30k lines of code.

As I did with the VideoCore, I tried to trace the path of a triangle from the host interface to the screen and attached my notes here. Usual caveats apply: I’ve probably gotten details wrong or misunderstood some things. Corrections and clarifications are welcome.

After the CPU has performed vertex transformations and lighting, it initiates rendering by writing parameters for a triangle to control registers that are mapped into host memory. Section 2.3.6 of the documentation defines the memory map. Here are some of the registers:

The meaning of the command parameter registers depends on the command opcode field. To draw a triangle, we will use the opcode TRIAN_3D (0x09), defined in section 5.8.15. Section 6.7 defines the parameters for the TRIAN_3D command:

Once we have programmed the values, writing the 3D_TRIG register from the previous table will start the rendering operation. Then the CPU must wait for the triangle to finish rendering before programming the next one.

Per the response from the author in the comments section, there are actually two sets of staging registers that allow the next command to be loaded while the previous one is being processed. The CPU still can only load one triangle at a time and must wait until a triangle finishes to load the next one.

Let’s start by tracing what happens when the host writes to the GPU control registers. We’ll start at hdl/de3d/de3d_top.v. The inputs that deal with the host bus have the hb_ prefix:

When we write each register, hb_wstrb (write strobe) goes high, indicating the data on the hb_adr/hb_din signals–which correspond to address and data–are valid. For example, here it writes command parameter 0 (vertex 0 X for a triangle command):

The de3d_reg (hdl/de3d/de3d_reg.v) module latches the value for all the 3D register parameters. A large chunk of this file consists of nested if/else statements that latch each register. For example, here is the code that latches the X coordinate of vertex 1:

Writing the TRG3D register has the side effect of starting triangle rasterization. The code is in hdl/de/der_reg_1.v:

The cmd_trig_comb is an output of this module that kicks off a number of state machines that start filling the triangle.

Here’s a block diagram of the 3D pipeline:

Every pipeline stage up to the pixel cache processes up to one pixel per cycle. This is different than VideoCore (and many other modern GPUs), which works on 2x2 quads.

The rasterizer determines which screen pixels a triangle covers.

As we saw above, the CPU writes triangle coordinates to the GPU as three x/y raster positions. But the rasterizer uses edge equations. It is the job of the des_grad module (hdl/de3d/des_grad.v) to compute these values (gradients). The des_reg module latched those the vertex positions when the CPU wrote them as described above. All of these values are routed in parallel (448 bits per vertex) into the des_grad module:

When the CPU initiates triangle rendering after writing the vertex parameters, des_grad begins computing the rasterization coefficients. It has a floating point ALU module (hdl/math/flt_alu.v) that can perform a few operations in parallel. The des_grad state machine drives the ALU block to compute the coefficients for the rasterizer. It takes 42 cycles total to set up one triangle. It writes each coefficient as it computes it back to des_reg, which collects these and outputs them in parallel as a 256 bit wide signal called ‘spac_bus’. This connects into the scan converter module, called des_smtri, short for State Machine Triangle (hdl/de3d/des_smtri.v). As its name implies, this module implements a state machine that sweeps across the triangle, outputting up to one fragment position per cycle:

When it has computed a pixel position, it asserts the t3_pixreq signal.

The fragment generator (hdl/de3d/des_frag_gen.v) performs the following operations for each pixel sent to it by the rasterizer:

This module outputs the raster position on screen and a bunch of computed parameters:

The current_u and current_v (which are texture coordinates) feed into to the texture cache. The remaining parameters connect to a FIFO which feeds them to the texel pipe.

The texture cache (hdl/lucy_tc/de3d_tc_top.v) receives U and V texture coordinates from the fragment generator. The push_uv signal goes high when a texel coordinate is available from the previous stage.

If the texel are in the cache, it will assert the ‘tc_ready’ signal and outputs four adjacent texel color values in parallel.

If the texture cache does not have the texel in question, it will stall while it fetches the data from the memory controller. It will assert tc_ready when the data is available. The texture cache supports a number of source color formats and performs color conversion as necessary.

When the texel pipe has a valid computed position, it asserts ‘pc_valid’ and sends the formatted pixel and position information to the pixel cache:

The Z values from the fragment generator bypass the texel pipe via a FIFO and are delivered to the pixel cache in the same cycle as the other data.

The pixel cache is contained in the ded_top module (hdl/de/ded_top.v). It instantiates submodules prefixed ‘ded_’, which stands for “Drawing Engine Datapath.”

Up until this point in the pipeline, everything has worked on a pixel at a time. But the memory controller works in 128 bit chunks (this GPU was advertised as “128 bit” graphics card, this is presumably what they were referring to). At 16 bits per pixel, that is eight pixels. The pixel cache collects the pixel data and sends a full burst in parallel to the memory controller:

We can see this in action below. The valid_3d signal indicates when a pixel is ready from the texel pipe. Once all of the pixels are collected, the pixel cache will push all 128 bits of the data (both Z and frame buffer data) out, along with a mask that indicates which pixels were covered. Near the edge of a triangle, it’s possible not all eight pixels overlap the triangle, in which case the 8 bit mask will indicate this.

The memory controller module (hdl/mc_graph/mc.v) combines a number of functions. It arbitrates access to internal memory from internal sources like the display list processor and the VGA controller. But for our discussion, the important part is performing final operations on the pixels and writing them back to the frame buffer. This includes alpha blending and Z-Buffer checking. These operations require reading existing data from the frame buffer:

When a batch of eight rendered pixels arrives from the graphics pipeline (via pixel cache), and the destination data is available from graphs memory, the mc_dat (hdl/mc_graph/mc_dat.v) module performs blending and z-buffer operations on all eight pixels in parallel. The module hdl/mc_graph/mc_dat16.v performs the alpha blending and raster operations for a pixel. You can see here that it instantiates an array of these, one for each pixel:

mc_dat handles Z-testing. A case statement selects the comparison based on the Z-operation. The loop instantiates logic for each pixel that sets new_z_mask according to the check

After the memory controller processes the pixels, it writes the pixel colors back to the framebuffer in display memory.